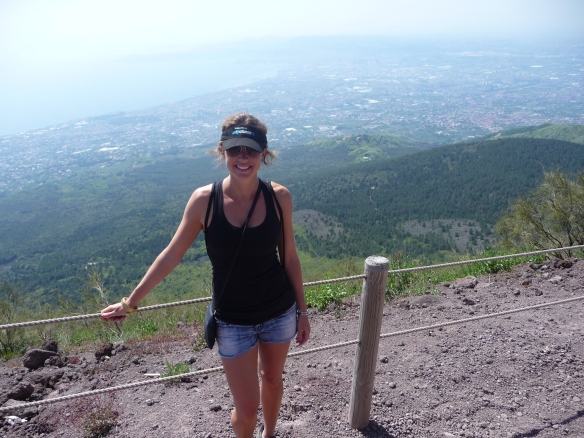 At the top of Vesuvius

The track around the crater

Ercolano Scavi – a town that was buried

Saturday was perhaps a little harder than it should’ve been, having finished up at 2am that morning at Daniele’s Club, it maybe wasn’t the best day to climb to the top of a volcano. But I did.

After a stand up caffe macchiato andmarmelatafrom the pasticceria, I jumped on theCircumvesuviana(local train that runs between Sorrento and Naples) and headed to Ercolano Scavi, a town which like Pompeii was buried during the erruption of Vesuvius in 79BC.

I had heard the ruins of Ercolano, while much smaller (the sea side town at the time of the erruption was home to only 2000 people, compared to 10,000 in Pompeii) were fascinating and in a better state of preservation. In some ‘houses’ the ellaborate mosaic floors are still intact and frescos are colourful with the intricate details very visible. Like Pompeii, walking around this town is a moving experience, particularly as you stand in what was then a local bar or restaurant and look up at the huge volcano which towers over you.

And so, while I’d heard mixed reviews about the hike up to the top of Vesuvius, I was still fascinated by this beast that I stare out at every day and which is visible from just about every town in the Bay of Naples, and jumped in the mini bus which would take me 1km from the very top.

The last 1km to the top of Vesuvius must be hiked on foot… and it is steep…! So steep in fact that there are ropes for you to pull yourself up with at certain points. They also offer you a long stick to assist you with the trek, which I discovered is not so much needed on the way up, but more so on the way down so you don’t fall flat on your face!

When you arrive at the top, the view is captivating for 360 degrees. While the visibility was not perfect on Saturday, I was still able to see every town in the Bay, as Capri in the distance. Staring down into the crater I could see while gases being emitted – evidence that it is very much alive and realistically could blow at any moment. In a reminder of the numerous fault lines that Italy lies on, there was sadly a big earthquake in Bologna that evening, claiming at least 7 lives. One doesn’t want to imagine the devastation that could be caused if and when Vesuvius errupts again one day.